Areli Gervacio, who now works as the receptionist at the Children First Orange Avenue campus, came here from Mexico in 2000, when she was only 15 years old. She and her sister joined her parents who had moved here four years earlier. The young mother of five children, now ranging in age from 2-18, has worked to be the best mother she can be to her children, though the journey has not always been easy.

Areli first came to Children First through its partnership with the Teen Parent Program at Riverview High School – Cyesis.

“Cyesis was very helpful,” she added. “I was able to get my diploma and took parenting classes where I learned a lot about caring for babies and children,” she said.

“Shortly after I married my boyfriend, Israel, I was expecting my second child. While I would have liked to continue my education, because of my situation it just wasn’t possible, so I decided to be a stay-at-home mom.

“While I was in high school, we had been living with my parents, but once married, we moved out of their house and into our own duplex. Two more children came in quick order, her second child, a boy, Isau, who is now 15, and a daughter, Marisol.

“Those years between 2005 and 2008 were a difficult time for our family. The recession hit us badly, as my husband, who worked in carpentry and then construction, was often out of work. “I don’t know how we made it through, but somehow we survived,” she said.

Areli had heard about Children First but did not know its name. “In the Hispanic community, it is known as the crayon school (named for the giant crayons that are part of the campus design on Orange Avenue).

Everybody talks about Las Crayolitas (the crayons),” she said.

“My first son went to school there at age 4 due to a speech impediment and then my second son was referred there when he was 3 with ADHD and ADD at their Booker Elementary location.”

A year and a half later, the young mother had her fourth child. “Things had begun to improve, as my husband had a more stable job. My child was a boy, Eylan, and today he is 12 years old,” she said. They later added one more to their family, a baby girl named Lorelay, who is now 2 and enrolled in the Early Head Start program at Children First.

“I liked the way they took care of the babies at Children First, very responsible, very on point. They respected everybody’s culture and taught the kids at their own pace, without pressure. They understand that every child is different, and they learn in different ways. It is always good to know that somebody you trust is looking after your child,” Areli said.

“I took classes at Children First’s Families First Institute, learning budgeting skills, teaching me how to handle my finances better. It is very important – especially with five children. It also allows me to pass those same skills on to my children.”

Lorelay started going to school here at Children First, and in October of last year, the receptionist position opened up. “I sent my resume in, and the Vocational Family Advocate helped me with it, and helped me improve my interview skills. I came for one interview and then last December they called me and told me I had the job,” she said. “I work, while my youngest daughter is in class here. It is the best,” she said.

“Once I came to work here, I received a salary and was able to help my family financially,” she said. “My hope is to continue working here as long as I can. My goal is to see that all of my children finish high school, and I believe we are on the right path toward achieving that goal. If possible, I would like them to continue on, either to a technical school or college,” she said. “It has not always been easy, but today I have a job that I love and a wonderful family.” 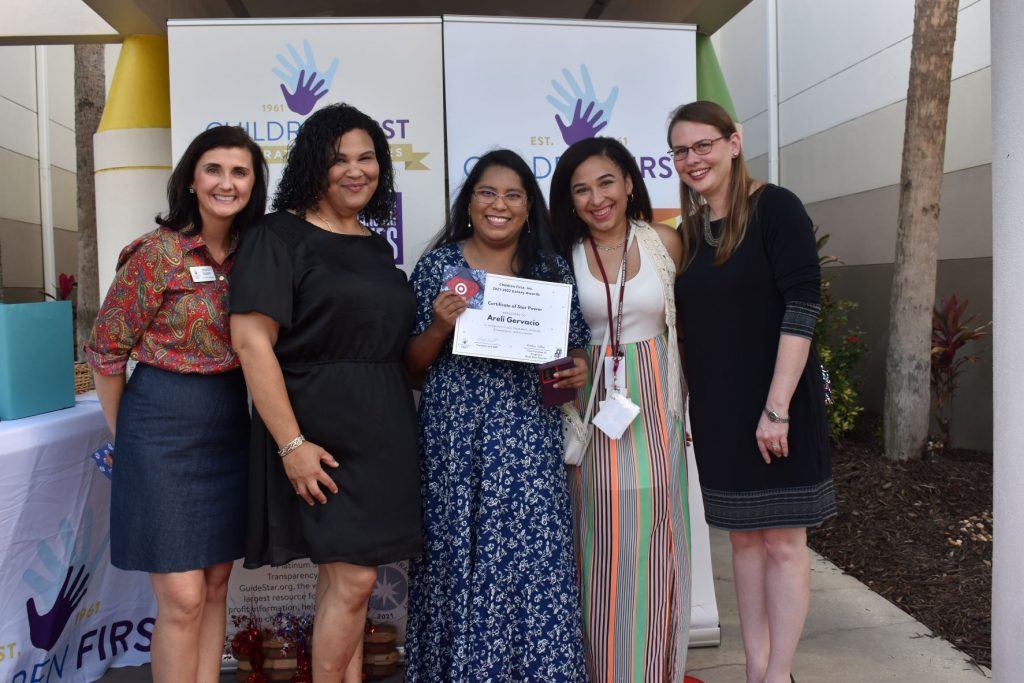 Areli was celebrated at the 2022 Galaxy Awards, alongside other parents, for her achievements in employment, education, family goals, building a home, and spending time in classroom activities with her daughter.